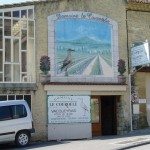 Located in between Gigondas and Chateauneuf du Pape, the village of Vacqueyras received Appellation Controllee status in 1990. Domaine Le Couroulu, founded in 1928 and still owned by the Ricard family, is known for producing some of the most full-bodied Vacqueyras and other wines from their 20 hectares of old Grenache and Syrah vines. The estate is named for the Curlew bird, which is known in Provencal dialect as Couroulu: this bird is the signature emblem on the Domaine’s labels. Parker rated the estate as an “excellent” (****) producer in his book, Wines of the Rhone Valley and cited it among his “Best European Wine Values.” Recently, he bestowed even more praise: “this is a sensational estate…whose wines have given me enormous pleasure for nearly two decades” (Wine Advocate #185, 10/31/09). Winemaker Guy Ricard, who represents the third generation, is one of the Rhone’s most passionate and agreeable personalities, qualities which are reflected in his full-throttle, generous and engaging wines. 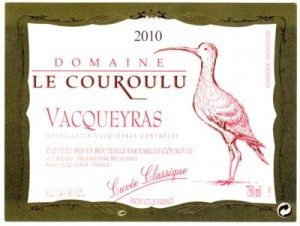 Domaine le Couroulu’s Vin de Pays de Vaucluse is a blend of 50% Syrah and 50% Merlot. It comes from vineyards on the sandy-clay plateau around the village of Vacqueyras. These soils are not suitable for Grenache (the principal grape of Vacqueyras) but the cooler microclimate allows Syrah and Merlot grapes to ripen well. Guy Ricard fashions his Vin de Pays by fermenting with the stems for 10 days. The wine is aged in large foudres for nine months before bottling. Couroulu’s Vin de Pays is an explosively fruity, spicy, tasty wine, which is ready to enjoy with Bistro fare. It represents excellent value.

The Vacqueyras Cuvee Classique is a blend of 60% Grenache, 25% Syrah and 15% Mourvedre. It undergoes a long, 20-day maceration period and is aged in large oak casks for two years before bottling. This big, spicy, robust, somewhat jammy wine represents exceptional value. It is an excellent match for grilled ribs, sausages, and steaks as well as roasts and stews of lamb, beef and game. Robert Parker consistently acclaims the Couroulu Vacqueyras as one of the finest wines of its appellation. 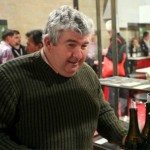 Guy Ricard makes about 700 cases per year of his Vacqueyras Vieilles Vignes (old-vines) cuvee. A blend of 60% Grenache and 40% Syrah, it comes from two parcels of Grenache planted by his grandfather in 1932, as well as a smaller plot of Syrah planted in 1960. These old vines have very low yields, giving the wine its exceptional concentration. It is an excellent match for grilled ribs, sausages, and steaks as well as roasts and stews of lamb, beef and game.