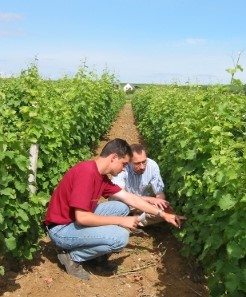 The Jean Pabiot family estate dates back to the late 19th century. Today the domaine is run by Alain and his son Jerome Pabiot, who represent the 4th and 5th generations respectively. It covers 29 hectares of choice sites across the Pouilly Fumé appellation.

Domaine Jean Pabiot’s Pouilly Fumé Les Fines Caillottes comes from 30 distinct parcels spread over 5 communes of the appellation. The sites have varying terroirs, all of which combine to give the wine remarkable complexity and nuance. The main types are limestone covered with small white pebbles (caillottes); marl with fossilized oysters; and flint. The sub soil is clay-limestone. The vines average 20 years of age, and the oldest vines, totaling 3 hectares, are over 40 years old on very stony soils. The vineyards are cultivated sustainably and no synthetic fertilizers are used. Many parcels have grass planted between the rows, and the Pabiots regularly green-harvest and remove leaves to aerate the vines. They use organic fertilizer in the form of vine cuttings to restore the soil’s balance. The cuttings are plowed into the soil which fosters a healthy natural ambiance in the vineyards. The grapes are moved quickly to the winery to minimize contact with oxygen. They are de-stemmed and allowed to partially (15% in 2012) soak with the skins at low temperature before pressing. Fermentation begins spontaneously, with the natural yeasts present on the grapes and each site of origin is vinified separately. The gross lees are removed 3 weeks after the fermentation stops. The wine then develops for 4 – 5 months in tank on its fine lees, with occasional pumping over of the lees for enrichment and added complexity. The diverse origins are assembled in March. The new vintage of Pouilly Fumé is bottled in April and released for sale one month later. 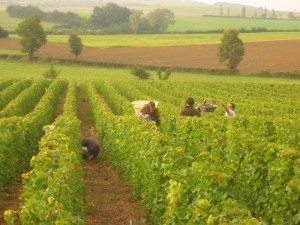 Domaine Jean Pabiot’s Pouilly Fumé Prestige des Fines Caillottes is winemaker Alain Pabiot’s selection of the best young wines made from his estate’s oldest vines in several vineyard parcels around the village of Les Loges. The vines are an average of 43 years of age; the youngest are 41 years of age, the oldest are 65. Les Loges has an ideal soil — a mix of limestone and clay covered with small white stones — and is the warmest part of the estate’s holdings. The Sauvignon Blanc fruit is hand-picked at optimal maturity (but not in an over-ripe state) to give a Pouilly Fumé of exceptional depth and structure. The grapes are given partial skin maceration and are gently pressed. Fermentation begins with the native yeasts in stainless steel tanks at controlled, low temperature.

The young wine is aged on its lees for 4 months, with regular stirring in the first half of the sur lie aging period. It is racked off the lees in March. Alain Pabiot then makes a final selection for his Prestige bottling on the basis of taste alone. The richest old-vines batches are assembled and matured in tank until the Fall. (Those not selected become part of Pabiot’s “normal” Pouilly Fumé Les Fines Caillottes.) The 2010 Pouilly Fumé Prestige des Fines Caillottes was bottled on November 22, 2011. Twelve Hundred cases were made for the vintage.