In the late 19th century, Maurice Deydier, a cooper by trade, founded a small Domaine in Châteauneuf du Pape. In the 1950s, his son Jean transformed the estate he had inherited from this father into the core of today’s Domaine Jean Deydier Les Clefs d’Or. Jean planted new vineyards and acquired others, bringing his holding to the size of 15 hectares. In 1957, Jean was awarded the medal of the Chevalier du Merite Agricole for “the loving, artisanal style of production that he brought to the development of his property, and the constant efforts he deployed to make it better.” Jean Deydier and his son Pierre in turn expanded the estate to its present size of 20 hectares of Châteauneuf du Pape and 12 hectares of Côtes du Rhone Massif d’Uchaux. Today, Pierre is aided by his daughter, Laurence and his nephew, Jean-Francois, who represent the sixth generation of the Deydier family. 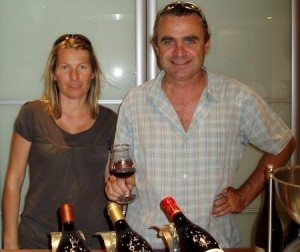 The Domaine’s holdings are mainly located in two of Chateauneuf’s greatest vineyards. One is the Pied Long (or Pielon) section, on the plateau north of the village of Châteauneuf, dominated by galets roulés, or large, round stones, over limestone-clay soil. Their 10 hectares of vines in the “Pied Long” were planted in the 1950s with a majority of Grenache and smaller plantings of other varietals typical to the appellation. The other part is in the famed “La Crau” vineyard to the east of the village. Here, the domaine’s 6 hectares of Grenache and Syrah vines grow on a superbly exposed hillside with a stony, limestone-clay soil. One half of the Grenache vines in La Crau parcel are 114 years old, having been planted in 1896. The domaine practices sustainable viticulture. Only native yeasts are used and the wines are bottled without filtration.

The Les Clefs d’Or Chateauneuf du Pape Rouge emanates from both vineyards. The blend is 65% Grenache, 15% Mourvèdre, 10% Syrah and a field blend of 10% Cinsault, Muscardin, Counoise and Vaccarèse which are vinified together. The wine is fermented for 20 days in concrete tanks and then aged in large, 50 hectolitre casks for about one year. Their Châteauneuf Blanc also comes from this vineyard. The monumental Châteauneuf du Pape Les Craus Centenaires is a blend of 80% Grenache from vines well over 100 years old and 20% Syrah. The yield is only 25 hectolitres per hectare. The wine is made from free-run juice only. It is given a three-week fermentation in tank followed by 18 months of aging in tank and foudre. Only 250 cases are made. This wine is one of the great treasures of Chateauneuf du Pape. 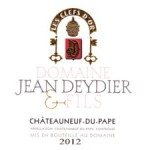