1923: ALBERT GUIMBERTEAU-GEORGES (1894-1960) purchased a property in Baudron composed of 4ha of vines, an ox and a horse to do the farm work. His property is located right next to that of his stepfather, FREDERIC BEYCHADE , which already owns 4ha of vines and farm buildings. It will transmit its heritage to her daughter Adrienne and son Albert George to enlarge their property which hosts a total of 4 natural water sources. Albert George developed cattle (beef cows) in addition to growing grapes and making wine.

1936: NELSON GUIMBERTEAU (born 1921) began working on the farm after his certificate of study. The property consisted of 8 hectares of vineyards, a herd of cows, farmland for fever, exploited for firewood forests. During World War II, between 1944 and 1945, Nelson was called up five months in France at the submarine base in Bordeaux, then was sent to Germany for 7 months under the Compulsory Work Service.

1949: Nelson married LAURE BERTEAU (born 1924) who is also a farmer’s daughter (1 ha of vineyards, 1ha of cereals, some dairy cows). It will have two son, Jean-Marie and Michael.

1952: Birth of MICHEL GUIMBERTEAU. After the certificate of study, Michel began working on the farm which then 9 hectares of vineyards, cattle ranching and logging.But Michael is passionate about wine as other farm activities that will stop gradually. He married in 1976 BERNADETTE Milhard (also born in 1952), daughter of winemakers Petit Palais. They have three children: Vincent (born 1978), SOPHIE (born 1984) and ALICE (born 1996). Together they will triple the size of the vineyard which achieved total 27ha AOC Montagne-Saint-Emilion and 8 hectares of AOC Bordeaux.

1999: VINCENT GUIMBERTEAU joined the family farm. 2005: Certification of the Estate in Farming : production method that consists in reasoning and thus to limit the use of chemicals for treatment.

2010: Conversion to organic farming production method that meets the living and the natural cycles of the plant but also the organic activity in the soil and biodiversity. To achieve these objectives, the farmer must meet specifications and regulations that exclude particular chemical synthetic fertilizers and synthetic pesticides use, and genetically modified organisms (GMOs).

2010: Arrival of SOPHIE GUIMBERTEAU and his companion CHARLES FORAY (born in 1984, native of Savoy) after spending five years together in Alsace in the world of wine. Sophie was in charge of marketing and communications at the Cave Cooperative and Old Armand Charles was head of culture at Domaine Marcel Deiss (wide area biodynamic Alsatian). They resume their respective roles Château Franc-Baudron but with more responsibilities! 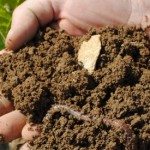 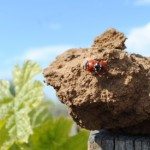 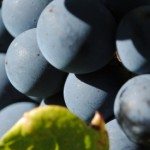 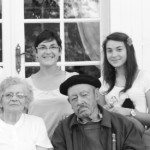 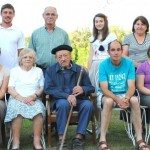